skip to main | skip to sidebar

It's been a few weeks now, but we ought to revisit the engagement and bridal shoots for Lee & Jo. Each shoot was a bit of an adventure as the couple tried to get a handle on exactly what feel they wanted to go for.
Most clients turn the shoot over completely to us as the photo artists to plan, set-up and execute shots according to our artistic sentiments. They may have a couple requests for us to repeat previous shots, but generally they put their trust in us to capture them in a style that matches their personality, or the way they dream of seeing themselves.

Then there are clients like Lee & Jo, who both have a strong sense of style and art, and they have many opinions about what should be done. The challenge here was that while they were both fairly opinionated, they were also indecisive about exactly what they wanted. So we went to work trying several different kinds of styles in order to discover exactly what would speak to the both of them. 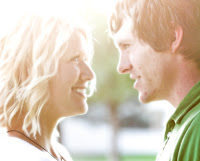 We began the engagement session at a park to get a more casual and organic feeling. In the photo on the left you see we utilized the sun, that which begins all things organic, no?

We also sought out the living texture of a large tree. In this situation the clothing color choice, green, adds to the whole nature feeling.

But then we went for a much different feeling--

-urban, retro, eclectic. You see the photo on the bench. We love this alley-way, and have been using it quite a bit. It has a great worn texture, rich color, even lighting (due to it being an alley), and has the benches and a lamp post that are fun to work with. All the props you see in that photo---camera, suitcases, books---were all the idea of Lee & Jo. The were thinking of a "The Journey Begins" theme. So they brought all the props, and after some discussion we set-up the shots.

It was all a little bit more involved than engagements really need to be, but obviously the photos turned out wonderfully.

After the alley, we visited another well worn wall, and here stuck with an urban feel but went for a more casual and playful attitude---less stylized. This was our favorite series. Certainly the alley-bench shots are unique, well composed, and catch your eye. But they are just that, stylized, putting on a show. More model/magazine-esque. This final series differs in that it meets our goals more than the other shoots, namely to preserve the authentic emotion, interaction, and personality of the couple. Our hope is that down the road they will look at these photos and remember those feelings, relive them, and rekindle them if they've wained. 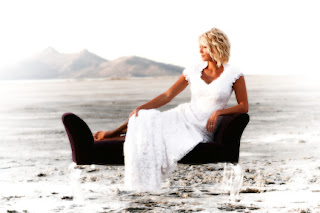 The bridals too required a dichotomous blend. As we discussed possible locations to shoot at with Lee and Jo, Lee liked the idea of the Great Salt Lake (a more solitary serenity) and Jo liked the forest/nature idea (also serene, but more organic and faerie). Jo wanted to please her fiance as well as herself so we did both.
The diffusion adds to the dreamy feel. And the acrylic legs on the furniture we took with us almost disappears, giving the illusion of floating. You would never now that there was a rank odor rising from the mud we were sinking in. Yet the photos are beautiful.

these photos are amazing!!

SO MUCH LOVE! You guys are phenomenal! I miss you A LOT!

Great work! Just love the bride in the woods shot! Very nice mood in that one. Can't wait to see more.